Taking dashboards to the next level

Taking dashboards to the next level

Thinger.io dashboarding system is one of the most famous features of the platform, as it allows creating graphical interfaces in a very simple way and without coding. Just selecting different widgets from an extensive list and using drag&drop technology the dashboard look and feel can be configured within minutes, then, little forms allow to manage the functionality of each widget so we can develop dashboards for many different purposes within minutes, such as data visualization from real-time or historical data but also for control device functions and configuration, thanks to different operating widgets such as buttons and sliders. The new 2.9.8  release includes a strong improvement of this feature focused on increasing management capabilities for those users that are creating large device deployments, increasing the scalability of the overall system, but also for developers that want to custom each aspect of these interfaces to adapt it to their exact requirements. So let’s take a look to the main improvements.

In order to simplify the use of dashboards in productivity environments, we have included two enhancements that improve navigation between dashboards. Dashboards can now be configured as templates, allowing them to dynamically choose the device or data bucket from which the data will be displayed. For this, it is essential that the resources and the identifiers of the defined variables have the same identifiers. When this option is selected in the dashboard settings tab, a small tab will appear in the upper right corner, allowing to choose the data source which will feed the dashboard widgets. On the other hand, appears the concept of “tabs”, which allows group boards according to the logic of the project, and provides a simple way to move between them.

These features make special sense when using the dashboarding tool to share information with other users or customers, something that can be done easily thanks to the project manager, which we talked about in this previous post. It basically allows you to associate resources to a project and share them with other user accounts.

All widget settings and behavior of each dashboard is stored in Thinger.io as a JSON file. In this new release we have enabled for the most advanced developers, a tab in the “Settings” context that gives access to this file, allowing to easily edit it in a terminal with rich text that checks for errors in the file structure, which is very useful to apply more precise customizations such as include the device ID in the title of the widget or using custom CSS configuration, but also allows other very interesting operations for beginners like choosing the order of representation of the widgets in the responsive format, or copying the configuration of a dashboard to apply its structure in others to simplify the creation of many similar dashboards. 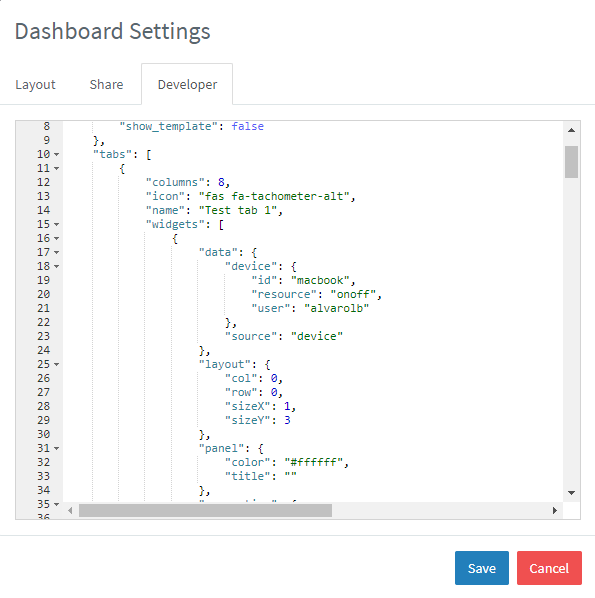 All these features can be enjoyed by making use of the free version of the platform, which you can access just by registering with Thinger.io. However, you get the most out of it in combination with other premium functionalities that are of great help in deploying business projects. If you want to learn more about how Thinger.io can help your company create IoT products, don’t hesitate on requesting a meet with our assistance team.

Note that you can also take a look at the rest of the improvements in the changelog, by clicking on the version number at the bottom of the console.

Last May 28th, The Things Network publicly announced the launch of its new stack for the deployment of LoRaWAN... read more

Today we  release a new version of Thinger.io APP with similar aspect but a completely new approach In our constant... read more

Grafana Integration Plugin A new plugin is now available at Thinger.io marketplace, this time it is the integration of the... read more

*We just launched an online course about thinger.io, 1.5h of content at Udemy. If you are fluent in Spanish we... read more

Narrowband technology is today one of the best ways to create long-range IoT projects such as Smart City, Industry 4.0, or... read more

Since its inception, Thinger.io Platform was developed with a strong focus on creating scalability, all its features from the... read more

Although it was born as a M2M technology, today MQTT is undoubtedly one of the most extended Internet of... read more

We are happy to announce that the new version of Thigner.io IoT platform has been released, and it comes... read more

It is increasingly common for connected projects to use geolocation elements, either to monitor the location of mobile assets... read more

OTA programming is finally here! That amazing technology allows to upload new firmware to our IoT devices “Over the... read more